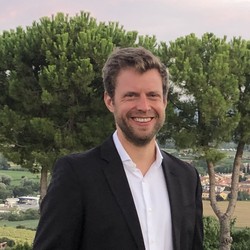 I am a Postdoctoral Scholar at the University of Mannheim and a member of the Collaborative Research Center CRC TR 224 “Economic Perspectives on Societal Challenges” in project A03 with Michèle Tertilt.

I also work as a Research Associate at the European University Institute (EUI) with Philipp Kircher on his ERC-Project “Technological Change: New Sources, Consequences, and Impact Mitigation”.

I obtained a PhD in Economics at the EUI in September 2020. My supervisors were Árpád Ábrahám and Dominik Sachs.

My research fields are macroeconomics, labor and public economics.

Here is my CV.

From Mancession to Shecession: Women's Employment in Regular and Pandemic Recessions

We examine the impact of the global recession triggered by the Covid-19 pandemic on women’s versus men’s employment. Whereas recent recessions in advanced economies had a disproportionate impact on men’s employment, giving rise to the moniker “mancessions,” we show that the pandemic recession of 2020 was a “shecession” with larger employment declines among women in most countries. We examine the causes behind this pattern using micro data from several national labor force surveys, and show that both the composition of women’s employment across industries and occupations as well as increased childcare needs during closures of schools and daycare centers made important contributions. Gender gaps in the employment impact of the pandemic arise almost entirely among workers who are unable to work from home. Among telecommuters a different kind of gender gap arises: women working from home during the pandemic spent more work time also doing childcare and experienced greater productivity reductions than men. We identify two key challenges for future research. First, why is the pandemic gender gap pervasive, i.e., why did women experience larger employment reductions than men even after accounting for industry/occupation and childcare effects? Second, how will the pandemic shape gender equality in a post-pandemic labor market that will likely continue to be characterized by pervasive telecommuting?

Equity and Efficiency of Childcare Subsidies: A Dynamic Structural Approach

Governments use different instruments to redistribute income: besides incomes taxes, different forms of income-contingent subsidies are provided. In this paper, we compare the efficiency of two large redistribution instruments in Germany: childcare subsidies and the income tax. We quantify this comparison in a dynamic discrete choice model that accounts for the endogenous dynamics of mothers’ lifecycle earnings. We find that the dynamic efficiency costs of redistribution through childcare subsidies are significantly larger than through income taxes. We show that even small differential returns to child development by household income reverse the result. Thus, if society has the same preferences for redistribution within the group of childcare-using families and within all families, childcare subsidies should become more progressive.

The Intergenerational Correlation of Employment: Mothers as Role Models

Linking data from the National Longitudinal Survey of Youth 1979 (NLSY79) and the NLSY79 Children and Young Adults, we document a substantial positive correlation of employment status between mothers and their offspring in the United States. Relative to a never employed mother, one who is employed throughout her working-age life increases the probability of her offspring’s employment by 11 percent in each given year, after controlling for ability, education, fertility, and wealth. The intergenerational transmission of maternal employment is stronger to daughters but significant also to sons. Investigating potential mechanisms, we provide suggestive evidence for a role model channel, through which labor force participation is transmitted. Offspring seem to emulate the example of their mother when they observe her working. By contrast, we are able to rule out several alternative candidate explanations such as network effects, occupation-specific human capital and local conditions of the labor market.

Future versus Present Labor Markets: the trade-off of place-based policies

Leading firms and the future of work